From OFF THE CUFF August/September 2011 Issue

No, we didn’t do card tricks—although USA-ITA Director of Communications Samantha did meet David Copperfield earlier in the week. We’re talking about MAGIC, the largest apparel, footwear, and accessories trade show in the United States, held every February and August in Sin City. From August 21-24, USA-ITA hosted seminars and a booth during SOURCING at MAGIC, North America’s largest sourcing event highlighting the entire apparel, accessories, and footwear supply chain and sourcing knowledge and opportunities across the globe.

This year, the focus of the sourcing exhibition was the Americas Pavilion, featuring over 70 exhibitors from North, Central, and South America, ranging from CAFTA-DR producers to U.S. companies like USA-ITA member Buhler Quality Yarns.  The Americas Pavilion was made possible by the hard work of the U.S. Department of Commerce’s Office of Textiles and Apparel (OTEXA) and a number of textile and apparel associations throughout the Western Hemisphere. 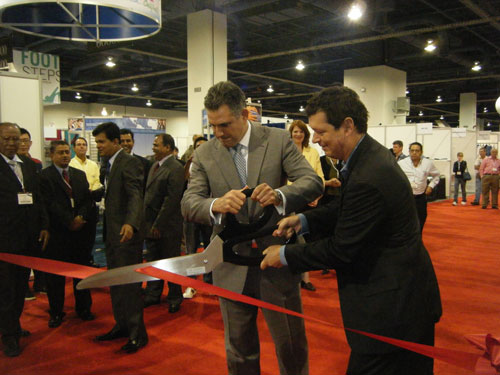 The highlight of SOURCING at MAGIC was “The New Western Hemisphere Supply Chain—Way Beyond the Basics” Sourcing Summit on Sunday, August 21, featuring Francisco Sánchez, Under Secretary of International Trade at the U.S. Department of Commerce International Trade Administration. This invitation-only seminar featured stories from regional producers as well as brands already sourcing in the region, including USA-ITA members Ken Mangone, Executive Vice President at JCPenney and USA-ITA Board of Directors member; Matt del Vecchio, Vice President at Abercrombie & Fitch; and, David Sasso, Vice President at Buhler Quality Yarns. Approximately 200 sourcing and manufacturing executives in the region attended the seminar, followed by a lively reception in the Americas Pavilion celebrating a job well done. 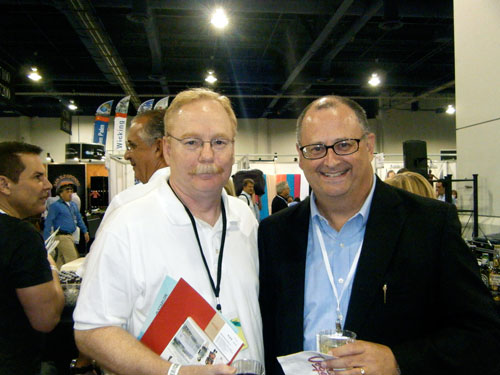 Avon's Gary Ross, USA-ITA board member and a speaker at the NEI seminar, with Don Hire of Crowley Logistics at the reception

On Monday, August 22, USA-ITA President Julie Hughes moderated an open discussion for all MAGIC attendees, featuring Under Secretary Sánchez, who started the discussion by emphasizing the benefits to sourcing in the Western Hemisphere, including the boost to the U.S. economy and the faster speed-to-market.  He was followed by regional brands and manufacturers spoke on their experiences, including USA-ITA Board of Directors member Gary Ross, Vice President at Avon Products Inc., who gave a lively presentation about Avon’s experience with sourcing in the Americas. [You can download his presentation here.]  The other speakers included Jim Hopkins, Vice President at Hamrick Mills in South Carolina [DOWNLOAD]; Randy Price, Vice President at VF Corporation [DOWNLOAD]; and Marty Moran, CEO of RadiciSpandex Corporation [DOWNLOAD].  After the panel discussion, Under Secretary Sánchez joined Julie Hughes, MAGIC International President Chris DeMoulin, and Unifi President Roger Berrier Jr. for a media roundtable with reporters from the Los Angeles Times and California Apparel News.[Check out MAGIC press at California Apparel News and Portfolio.com.] 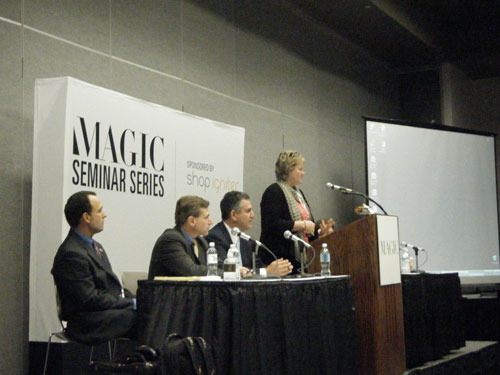 Finally, the Sourcing in the Americas Summit closed with a sourcing issues forum, an invitation-only discussion between Administration officials and regional manufacturers. Gail Strickler, Assistant U.S. Trade Representative for Textiles, and Kim Glas, Deputy Assistant Secretary for the Office of Textiles and Apparel, joined regional associations in talking through the issues. [You may recall that Ms. Strickler and Ms. Glas spoke at our July 20 seminar in New York City and you can find their presentation here.]

In all, the Sourcing in the Americas Summit was a huge success—and both the Administration officials and the regional brands and manufacturers agreed that it was an exciting “meeting of the minds” that will hopefully lead to greater opportunities for everyone in the Western Hemisphere.

Check out our Flickr photostream for more photos from MAGIC!